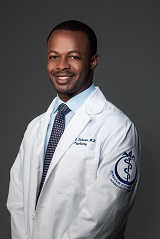 When Easley walked into the bank in the summer of 2017, he was suffering from severe post-traumatic stress disorder. Easley called the WSB-TV newsroom and said he had a bomb. Easley promised not to harm hostages but voiced his frustration with Veteran's Affairs after he said he didn't get his disability check. Easley was shot and killed by police during the incident.

Easley's struggle with mental illness is front and center in the movie.

WSB-TV Cobb County Bureau Chief Michele Newell spoke with Dr. Bakari Vickerson, an assistant professor in the Department of Psychiatry and Behavioral Science at Morehouse School of Medicine, about the struggle Black veterans face when it comes to mental illness and the resources that are needed for veterans in general.

"In telling his story, you're not just telling his story, but you're telling the story of many veterans, Black male veterans who have had somewhat of a similar experience," Dr. Vickerson said. "Maybe it didn't get to the extreme in which they felt they had to go to a bank in order to hear their challenges, or to make sure their challenges were heard. They all go through similar challenges and a lot of times, that can leave a person feeling alone. Feeling as if they have done so much for this country but yet have not received enough — or anything — in return. I know some of the issues that they've had to face just growing up Black here in this country — let alone to couple that with either serving in the military or actually serving in combat."

Dr. Vickerson has experience working with Black men in the military as well as veterans.

"I had experience working at the Atlanta VA, where I would see veterans coming to their outpatient psychiatric clinic and medication management appointments, and I would also do talk therapy with them. I can't imagine what they're actually going through, but oftentimes, I can feel it through their words or even through their tears," said Dr. Vickerson.

Dr. Vickerson believes there is a need for more resources.

"Mental health should be a stronger component of military services because the risk is so great. The risk is so great that we should already have something in place to screen and also treat veterans as soon as possible," said Dr. Vickerson.