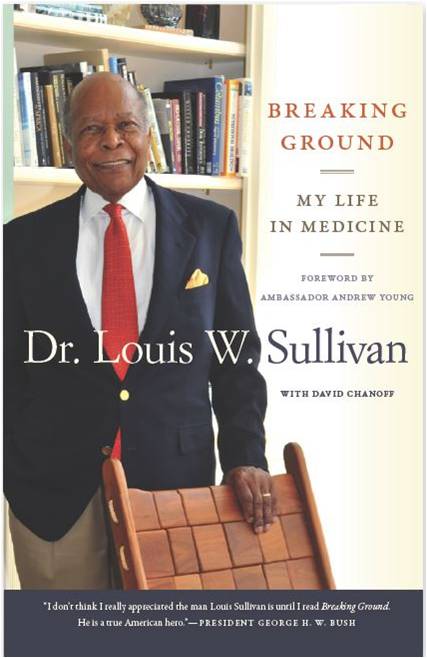 Atlanta, GA – The autobiography of one of the nation’s most admired public health leaders has won an NAACP Image Award.

Authored by Louis W. Sullivan, M.D. (with David Chanoff), and published by the University of Georgia Press, “Breaking Ground: My Life in Medicine” chronicles Sullivan’s rise from a childhood in the Jim Crow South to become a physician, founding dean of Morehouse School of Medicine -- the first predominantly black medical school established in the 20th Century -- and to serve as secretary of the U.S. Department of Health and Human Services in the Cabinet of President George H.W. Bush from 1989-1993.

The annual NAACP Image Awards celebrates the accomplishments of people of color in literature, film, television, and music and also honors individuals or groups who promote social justice through creative endeavors.

Winners in the 46th NAACP Image Awards literary categories were announced at a gala dinner in Pasadena, California Thursday, February 5, 2015.

Louis W. Sullivan, M.D., is chairman of the board of the National Health Museum in Atlanta, Georgia, whose goal is to improve the health of Americans by enhancing health literacy and advancing healthy behaviors.  He also is chairman of the Washington, D.C.-based Sullivan Alliance to Transform the Health Professions -- a national non-profit organization with a community-focused agenda to diversify and transform health professions’ education and health delivery systems.

As Secretary of the U.S. Department of Health and Human Services, Dr. Sullivan worked to improve the health and health behavior of Americans including (1) leading the effort to increase the National Institutes of Health (NIH) budget from $8.0 billion in 1989 to $13.1 billion in 1993; (2) establishing at NIH, the Office of Research on Minority Health, which has become the Institute for Research on Minority Health and Health Disparities; (3) inaugurating the Women’s Health Research Program at NIH; (4)  the introduction of a new, improved Food and Drug Administration food label; (5) the release of Healthy People 2000, a guide for improved health promotion/disease prevention activities; (6) educating the public regarding the health dangers from tobacco use; (7) leading the successful effort to prevent the introduction of “Uptown,” a non-filtered, mentholated cigarette; (8) inaugurating a $100 million minority male health and injury prevention initiative;  and (9) implementing greater gender and ethnic diversity in senior positions of HHS, including the appointment of the first female director of NIH, the first female (and first Hispanic) Surgeon General of the U.S. Public Health Service, the first African American Commissioner of the Social Security Administration, and the first African-American Administrator of the Health Care Financing Administration (now the Center for Medicare and Medicaid Services).

Dr. and Mrs. E. Ginger Sullivan are sponsors of The Sullivan 5K Run/Walk for Health & Fitness on Martha’s Vineyard. Now in its 26th year, the popular event has raised more than $400,000 to benefit Martha’s Vineyard Hospital.

Dr. Sullivan is the recipient of more than 60 honorary degrees, including an honorary doctor of medicine degree from the University of Pretoria in South Africa.

He is also the author of The Morehouse Mystique: Becoming a Doctor at the Nation’s Newest African American Medical School (with Marybeth Gasman, 2012, Johns Hopkins University Press).

David Chanoff received his B.A. from The Johns Hopkins University and his Ph.D. in English and American Literature from Brandeis. Hehas written on current affairs, foreign policy, education, refugee issues, literary history, and other subjects for The New York Times Magazine, The Wall Street Journal, The New Republic, The Washington Quarterly, The American Journal of Education, The New York Review of Books, The Washington Post, and The American Scholar.  He is a featured writer in the Washington Post’s anthology The Writing Life and his work appears in the current Norton Reader Anthology of Non-Fiction.  His sixteen books include collaborations with former Surgeon General Joycelyn Elders, healthcare disparities expert Dr. Augustus White, former Israeli Prime Minister Ariel Sharon and former Chairman of the Joint Chiefs of Staff Adm. William Crowe.

Founded in 1938, the UGA Press is the oldest and largest book publisher in the state of Georgia. It has been a member of the Association of American University Presses since 1940. With a full-time staff of 26 publishing professionals, the press currently publishes 60-70 new books a year and has more than 1,800 titles in print. It has well-established lists in Atlantic World and American history, American literature, African-American studies, southern studies and environmental studies, as well as a growing presence in the fields of food studies, geography, urban studies, international affairs and security studies. For more information on UGA Press, see www.ugapress.org/

About The Sullivan Alliance Under the leadership of Dr. Louis W. Sullivan, the Sullivan Alliance to Transform the Health Professions, Inc. was organized in January 2005, to act on the reports and recommendations of the Sullivan Commission (Missing Persons: Minorities in the Health Professions, September, 2004), and the Institute of Medicine Committee on Institutional and Policy-Level Strategies for Increasing the Diversity of the U.S. Healthcare Workforce (In the Nation’s Compelling Interest: Ensuring Diversity in the Healthcare Workforce). The Alliance is engaged, domestically and internationally, in health workforce and health disparities projects, particularly innovative health workforce diversity efforts, interprofessional training and health care delivery. For more information, see www.thesullivanalliance.org, Twitter (@SullivanAllianc) or Facebook (www.facebook.com/SullivanAlliance).