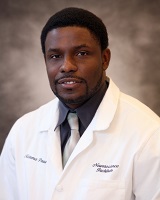 Ketema Paul remembers being wowed at an early age by his cousin’s chemistry set and always feeling drawn to science. This interest followed him to Howard University, Washington, D.C., where he earned an undergraduate degree in biology, and on to Georgia State University, Atlanta for his Ph.D. Now, an associate professor at Atlanta’s Morehouse School of Medicine and the subject of our latest LabTV video, Paul runs his own neuroscience lab studying sleep disorders, which affect at least 60 million Americans as chronic or occasional problems and account for an estimated $16 billion in medical costs each year [1].

Paul’s path to the research bench is an interesting one. The product of a tough neighborhood in Washington, D. C., Paul lost a lot of friends to violence and faced many uncertainties. After college, he moved to Atlanta to try his hand at being a music producer and eventually took a side gig as a disc jockey for the campus radio station at Georgia State. Then one day after his radio show, Paul wandered over to have a look inside a nearby neuroscience lab just for kicks and opened the door on a discussion that would change his life.