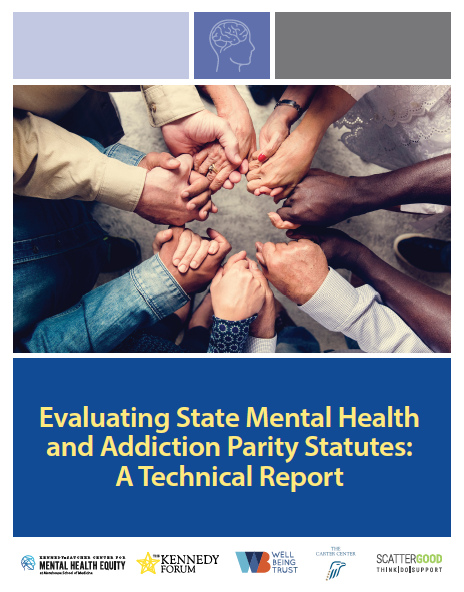 WASHINGTON, Oct 3, 2018 – Today, at an event recognizing the 10th anniversary of the Mental Health Parity and Addiction Equity Act (MHPAEA), The Kennedy-Satcher Center for Mental Health Equity in the Satcher Health Leadership Institute at Morehouse School of Medicine, The Kennedy Forum, The Carter Center, and Well Being Trust (WBT) will jointly release “Evaluating State Mental Health and Addiction Parity Statutes,” with 32 states receiving a failing grade for statues designed to ensure equal access to mental health and addiction treatment.

“Strong state parity laws are the critical foundation for ensuring enforcement and ending discrimination in coverage of mental health and substance use disorder services,” said Benjamin F. Miller, Psy.D., Chief Strategy Officer, WBT. “Without strong parity laws, it’s basically a lottery as to what kind of care a person might get – there is seemingly zero accountability and little-to-no transparency. Patients, providers, and policymakers often cannot know whether a health plan is providing access to mental health services as it should.”

To address the alarming results of the state-by-state parity report cards, Patrick J. Kennedy, former U.S. Representative, co-sponsor of MHPAEA, and founder of The Kennedy Forum, will conclude the event by announcing “Don’t Deny Me” – a first-of-its-kind consumer action campaign designed to empower American families to fight back against illegal insurance denials of mental health and substance use disorder treatment services and spark a movement that pressures elected officials, insurance commissioners, and attorneys general to enforce parity laws.

“We must break the silence surrounding barriers to care and bring transparency to a system that oppresses those with mental health and substance use disorders,” said Kennedy. “Treatment services shouldn’t be something only the rich can afford and no parent should ever have to face financial ruin to save their child’s life, especially after paying into an insurance plan diligently for years.”

The state-by-state parity report cards, as well as a technical report and consumer issue brief can be found at www.ParityTrack.org/Anniversary.

More information about the consumer campaign can be found at DontDenyMe.org

About The Kennedy Forum
Founded in 2013 by former Congressman Patrick J. Kennedy (D-R.I.), The Kennedy Forum leads a national dialogue on transforming the health care system by uniting mental health advocates, business leaders, and government agencies around a common set of principles, including full implementation of the Federal Parity Law. Launched in celebration of the 50th anniversary of President Kennedy’s signing of the landmark Community Mental Health Act, the nonprofit aims to achieve health equity by advancing evidence-based practices, policies, and programming for the treatment of mental health and addiction issues. The Kennedy Forum publishes frequent issue briefs and is a repository of other educational resources and tools focused on parity. To learn more and donate, please visit www.thekennedyforum.org.

About Well Being Trust
Well Being Trust is a national foundation dedicated to advancing the mental, social, and spiritual health of the nation. Created to include participation from organizations across sectors and perspectives, Well Being Trust is committed to innovating and addressing the most critical mental health challenges facing America, and to transforming individual and community well-being. www.wellbeingtrust.org. Twitter: @WellBeingTrust