At MSM, the funds will be used to reduce medical school loan debt for Black students currently enrolled and receiving student aid. Each student will receive approximately $100,000.

“Now, more than ever before, the world needs what we do best. At MSM, we believe that instilling cultural competence in our future physicians is a key part of closing the health equity gap.”
Dr. Valerie Montgomery Rice
President and Dean of Morehouse School of Medicine

Amid COVID-19 Pandemic, Bloomberg Philanthropies Commits $100 Million to Help Increase Number of Black Doctors in U.S.
Mike Bloomberg announced that Bloomberg Philanthropies will support the nation’s four historically Black medical schools with $100 million to help increase the number of Black doctors in the U.S. by significantly reducing the debt burden of approximately 800 medical students, many of whom face increased financial pressure due to COVID-19. 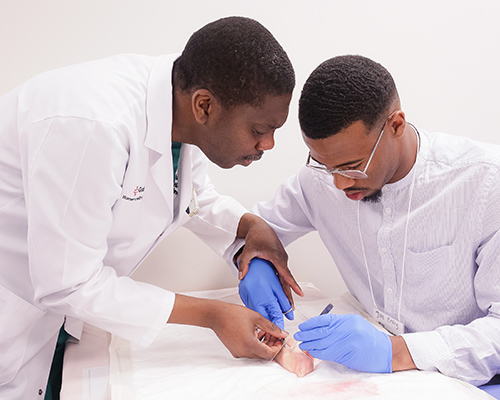 The New York Times—Bloomberg Gives Big to Black Medical Schools
The billionaire is making a $100 million donation to four institutions in an effort to improve the health and wealth of Black communities.

CNN—Opinion: To save Black lives, we need more Black doctors
Michael R. Bloomberg, Wayne A. I. Frederick, David M. Carlisle, Valerie Montgomery Rice and James Hildreth write that there are too few Black doctors and that Bloomberg Philanthropies' commitment to give $100 million to America's historically black medical schools is a partnership to increase the number of Black doctors by addressing one of the biggest obstacles: student debt.

AJC—Morehouse med school to use record $26 million gift on student debt
Atlanta-based Morehouse School of Medicine announced Thursday it has received its largest gift ever, $26.3 million from Bloomberg Philanthropies.

of the nation's population is Black

of practicing physicians are Black