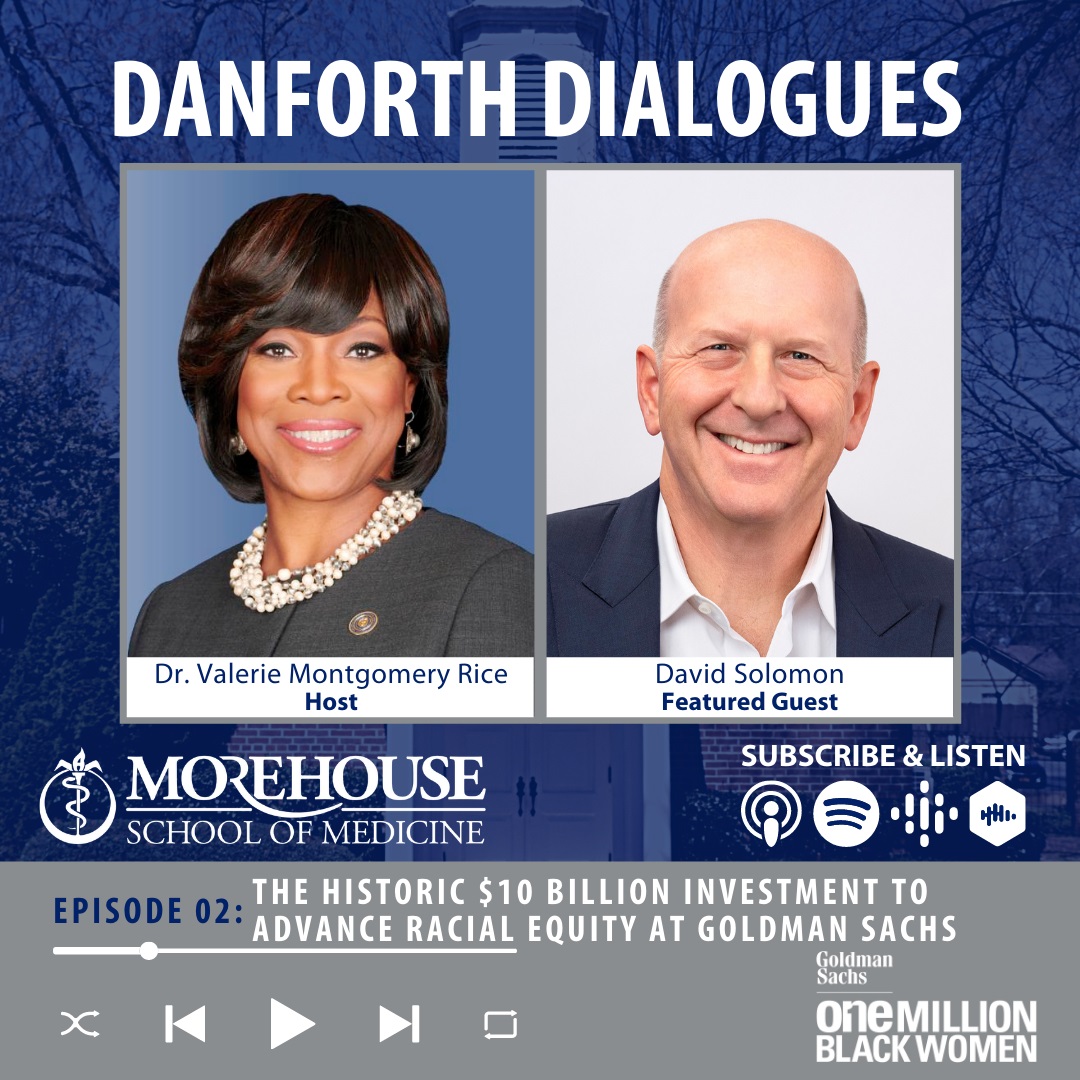 ATLANTA – APRIL 25, 2022 – Morehouse School of Medicine (MSM) today published the latest edition of its new "Danforth Dialogues" podcast, featuring a “Conversation of Significance” between Morehouse School of Medicine President and CEO Dr. Valerie Montgomery Rice and Goldman Sachs Chairman and CEO David Solomon. The podcast discusses Goldman Sachs’ One Million Black Women initiative,  which commits $10 billion in direct investment capital and $100 million in philanthropic capital over the next decade to address the dual disproportionate gender and racial biases that Black women have faced for generations, which have only been exacerbated by the pandemic.

Launched last month, “Danforth Dialogues” focuses on the leadership lessons from the frontlines of the COVID-19 pandemic and their broader implication for society. Launched in March 2021,  in the midst of the pandemic, One Million Black Women is named for and guided by the goal of impacting the lives of at least one million Black women by 2030. The initiative focuses on investments in Black women at every stage of their lives across the key impact pillars of healthcare, job creation and workforce advancement, education, housing, digital connectivity, financial health and access to capital.

"Goldman Sachs has made an incredible commitment to Black women in this country through its One Million Black Women initiative and we are so pleased to have David Solomon on our Danforth Dialogues podcast to talk about how this program was created and what he believes will be the impact of this type of effort in coming years,” said Dr. Montgomery Rice.

“I am honored to discuss our One Million Black Women initiative with Dr. Montgomery Rice, who is a valued member of our Advisory Council in her own right,” said Solomon. “Morehouse School of Medicine’s Center for Maternal Health Equity was one of the first investments we made, and those funds will go a long way toward improving maternal health in the Black community.”

Solomon said during the podcast that in the aftermath of George Floyd’s death, Goldman’s leadership team began a research effort to determine the areas where they could use their resources to have a positive impact in the Black community. “At the time the research was done, the average net worth of  Black women in the United States was less than $10,000,” said Solomon, compared to an average net worth of over $90,000 for white men.. “So we decided we needed to find a way to narrow that gap.”

Dr. Montgomery Rice, who participated in a large number of the more than 50 listening sessions Goldman held with Black women to develop the initiative, said she “appreciated the transparency that Goldman exhibited during the process providing information on wins and lessons learned” that will help to advance its efforts in the future.

In addition to discussing  One Million Black Women, Dr. Montgomery Rice and Solomon also discussed their views on the impact of the pandemic across society in coming years and Solomon’s advice to MSM students as they begin their careers.

Named after the historic Danforth Chapel on the Morehouse College campus, the podcast series will feature a cross-section of guests and topics. The “Conversation of Significance” editions will feature more in-depth discussions with key leaders from a wide range of backgrounds.  Other editions could include multiple guests and topics not directly related to the pandemic, but focused on broader aspects of leadership.

To hear this edition of the podcast, click here. For more information about the Danforth Dialogues leadership series, click here.

About Morehouse School of Medicine

Founded in 1975, Morehouse School of Medicine (MSM) is among the nation's leading educators of primary care physicians, biomedical scientists, and public health professionals. An independent and private historically-Black medical school, MSM was recognized by the Annals of Internal Medicine as the nation's number one medical school in fulfilling a social mission—the creation and advancement of health equity. Morehouse School of Medicine's faculty and alumni are noted for excellence in teaching, research, and public policy, as well as exceptional patient care. MSM is accredited by the Commission on Colleges of the Southern Association of Colleges and Schools to award doctoral and master's degrees. To learn more about programs and donate today, please visit www.msm.edu or call 404-752-1500.

About One Million Black Women

In partnership with Black-women-led organizations, financial institutions and other partners, Goldman Sachs has committed $10 billion in direct investment capital and $100 million in philanthropic capital over the next decade to address the dual disproportionate gender and racial biases that Black women have faced for generations, which have only been exacerbated by the pandemic. The initiative, One Million Black Women, is named for and guided by the goal of impacting the lives of at least one million Black women by 2030. Goldman Sachs research has shown that sustained investments in Black women across the core pillars of housing, healthcare, access to capital, education, job creation and workforce advancement, digital connectivity and financial health will catalyze economic growth, making for not only a fairer, but also a richer society.