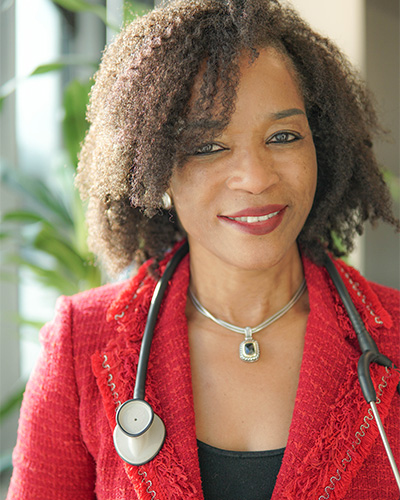 A national and internationally recognized clinician scientist with particular focus on cardiovascular disparities and women’s health, Dr Ofili has been continuously funded by the NIH and industry/foundations since 1994, with a track record in clinical trials that impact health disparities. In 2002, as president of the Association of Black Cardiologists, she led the initiative to implement the landmark African American Heart Failure Trial (AHEFT), whose findings led to a change in practice guidelines for the treatment of heart failure in African Americans.

Over the past seventeen years, she has led the growth of  the clinical research infrastructure  and training programs at Morehouse School of Medicine (MSM) with awards totaling over $150 million, including serving as the founding director of the U54 center of clinical research excellence, the community physicians network, the U54 RCMI Center of Excellence for Clinical and Translational Research and the R25 clinical research education and career development program. Dr Ofili has mentored over 30 MD and PhD  clinical and translational science investigators, many of who remain at MSM. She has  mentored over 25 underrepresented minority STEM undergraduates, and high school students through funding from NASA  and the Minority Biomedical Research Students program.

She is the senior co-PI of the Atlanta Clinical and Translational Science Institute (ACTSI), a citywide collaborative CTSA at Emory University, Morehouse School of Medicine and Georgia Institute of Technology, along with their partnering health systems and statewide research organizations. Since 2007, ACTSI has engaged over 673 investigators, and 134 postdoctoral and predoctoral trainees in  discovery science, training and community engagement. Dr Ofili has led successful multi institutional collaborations through the ACTSI and the RCMI Translational Research Network of 18 historically Black, Hispanic and Minority Serving Institutions across the nation, and was lead author of a publication on models of partnerships between HBCUs/MSIs and research intensive institutions.

Dr Ofili holds a  patent for  "A system and method for chronic illness care", and is the recipient of over 20 national and international awards, including the 2003 National Library of Medicine's "Changing the Face of Medicine, the Rise of America's Women",  The Daniel Savage Memorial Science Award from the Association of Black Cardiologists, America's Top Doctors by Black Enterprise Magazine and 100 Most influential healthcare leaders by Atlanta Business Chronicle.

She has  delivered over 600 scientific presentations and published over 130 scientific papers in national and international  journals. As a AAMC 2007 Council of Dean Fellow, Dr Ofili led a project on best practices to sustaining the biomedical and physician workforce. She has advised the NIH on diversity in the biomedical research workforce, and  currently serves on the Advisory Board of the National Clinical Center (NIH), and on the AAMC advisory panel on research. She is an elected member of the Association of University Cardiologists, and is on the board of directors of the National Space Biomedical Research Institute.

American Board of Internal Medicine

Ferdinand KC, Elkayam U, Mancini D, Ofili E, Piña I, Anand I, Feldman AM, McNamara D, Leggett C.  Use of isosorbide dinitrate and hydralazine in African-Americans with heart failure 9 years after the African-American Heart Failure Trial.  Am J Cardiol. 2014 Jul 1;114(1):151-9.