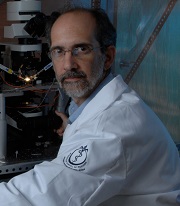 UNDERGRADUATE:
University of California
Degree: Bachelor of Science in Biochemistry

Modulation of Synaptic and Extra-Synaptic Plasticity

Long term changes in rapid electrical signaling between neurons (plasticity) may be a mode of memory storage within our brains.  Memory acquisition, retention and learning is influenced by various neurological and neuropsychiatric conditions. My laboratory is focused on elucidating functional changes in signaling and circuitry in different parts of the brain as a result of normal aging, or as a result of neuropsychiatric disease such as depression or neurological disease such as epilepsy. We use electrophysiological techniques combined with optogenetics and mouse models to measure changes in postsynaptic potentials as well as action potentials in the prefrontal cortex and hippocampus. The hippocampus is associated with spatial and temporal learning and memory, while the prefrontal cortex is involved in higher brain function including facets of memory and attention. Among the projects currently running in the laboratory are:

Cognitive Impairment in Epilepsy - The epileptic state is caused by an imbalance of excitation and inhibition in brain circuitry, such that excitation exceeds inhibition.  Often, patients with epilepsy have co-morbid cognitive impairment which can affect their quality of life.  Using animal models of epilepsy, we investigate what differences exist in induction of long-term plastic changes in rapid electrical signaling within and between neurons.

Cognitive Impairment in Depression - Lack of Serotonin is associated with a clinically depressed state, as SSRIs (selective serotonin reuptake inhibitors) can be used as anti-depressants.  How does serotonin affect neuronal communication? Is the ability to cause long term changes in plasticity influenced by serotonin?