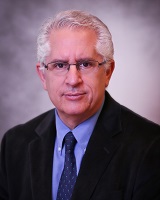 The mammalian hippocampal formation subserves normal learning and memory, but when an injury to the temporal lobe occurs, the hippocampus can become a source of devastating epileptic seizures that often cannot currently be controlled. Our lab is interested in understanding how and why an injured hippocampus becomes spontaneously and abnormally hyperactive, and we develop animal models that replicate the human neurological disorder and can be used to develop new therapies.

Currently, we use chronically implanted electrodes and continuous recording methods that enable us to produce a controlled injury and then assess hippocampal hyperexcitability and epilepsy onset. In addition to in vivo electrophysiology, we use anatomical and immunocytochemical methods to characterize the pathology and determine how it is related to the epileptic state. Our most recent efforts focus on developing a treatment to stop seizures without producing significant side effects.

Sloviter, R.S., Bumanglag, A.V., Defining “epileptogenesis” and identifying “antiepileptogenic targets” in animal models of acquired temporal lobe epilepsy is not as simple as it might seem, Neuropharmacology 69:3-15, 2013, doi: 10.1016/j.neuropharm.2012.01.022

Decade of the Brain Lecturer, American Academy of Neurology

Fellow, American Association for the Advancement of Science