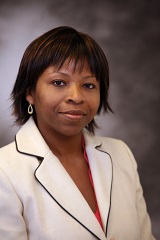 
GRADUATE:
University of Alabama at Birmingham
Degree: Doctor of Philosophy in Physiology

Obesity is a major and growing health problem in the United States and throughout the world that predisposes individuals to an increased risk for developing cardiovascular diseases such as hypertension, atherosclerosis and stroke. The underlying basis for these clinical sequelae is systemic vascular disease.  Expansion of adipose tissue mass during obesity alters adipocytokine, adipocyte-derived hormones, production and secretion which can affect downstream signaling pathways that mediate changes in vascular structure and function.  Serine/threonine kinases are an important class of regulatory molecules that transmit signals from adipocytokines to control rapid and reversible phosphorylation of specific substrates that influence cellular differentiation, growth and survival processes important to normal vascular function and disease development.  As vascular remodeling involves changes in vascular smooth muscle cell (VSMC) migration, survival and inflammatory processes, understanding the molecular mechanisms underlying vascular proliferative diseases is a critical towards the development of effective therapeutic intervention.

The long-term research interests of the Francis laboratory focus on the molecular physiology and vascular biology of obesity and hypertension-related vascular diseases. In this regard, the lab identified serum and glucocorticoid-inducible kinase 1 (SGK1) in aortic smooth muscle cells as a potentially important serine/threonine kinase that modulates VSMC function and vessel disease. Our research objective is to understand the role of vascular-derived SGK1 and its substrates in relevant cardiovascular diseases settings.  In light of the emergence of a role for mitochondrial dysfunction in hypertension and obesity our research also explores the role of mitochondrial structure and function in hypertension and during obesity.  Thus, my laboratory has the following on-going projects:

These projects rely on small rodent models of hypertension and diet-induced obesity, as well as in vitro vascular cell cultures and proteomics approaches to understand the contribution of the SGK1 signaling pathway in the progression of cardiovascular diseases.


Our work is currently supported through an NIH funded grant.  Individuals interested in pursuing postdoctoral research study in the lab are encouraged to apply.