Ms. Tchio is a graduate of Kennesaw State University. She entered MSM's M.S. in Biomedical Research program in 2014, and due to her excellent performance in that program was accepted to transfer into MSM's Ph.D. in Biomedical Sciences program beginning in the fall of 2015. Her pancreatic cancer research is being conducted in the laboratory of Dr. Ruben Rene Gonzalez-Perez in MSM's department of Microbiology, Biochemistry, and Immunology.

For 2015, CJJRF is going purple in support of pancreatic cancer. Calvin Johnson Jr. is an NFL All-Pro wide receiver for the Detroit Lions as well as an Atlanta native who played his college football at Georgia Tech. In 2014, Calvin’s mother, Dr. Arica Johnson, was diagnosed with pancreatic cancer and with early intervention, survived.

The relationship between MSM and Calvin Johnson Jr.’s family continues to grow. His sister, Dr. Erica Johnson, is a 2008 graduate of MSM’s Ph.D. in Biomedical Sciences program. She was a student under the direction of Dr. James Lillard, also in our department of Microbiology, Biochemistry, and Immunology. She is currently working as a senior postdoctoral research fellow in pediatric infectious diseases at Emory University. She also serves as co-executive director of CJJRF. Calvin’s brother, Wali Johnson, is a rising fourth-year medical student at MSM and the incoming president of MSM’s student government association. He serves as secretary of CJJRF’s executive board. 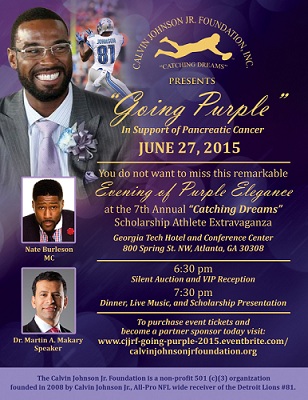 The mission of the Calvin Johnson Jr. Foundation is "to change the mindset of youth from struggle to survival, from poor self-esteem to excitement of life, from dependent thinking to goal setting self-sufficiency, and from hopelessness to empowerment." Since its inception, CJJRF has assisted hundreds of youth with limited financial resources "catch" their dreams on and off the field. The Calvin Johnson Jr. Foundation, Inc., is a non-profit 501(c)(3) organization founded by Johnson in 2008.