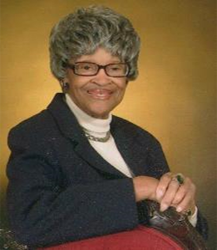 Mrs. Ella Heard Trammell at 94 years young has accomplished so very much during her life.  She is a native Atlantan who finished Booker T. Washington High School.  She matriculated at Clark College where she earned her Bachelor of Arts in Education and her Master’s in Education from Atlanta University (now Clark‐Atlanta University).  Her natural talent as a teacher was developed for many years in the public school system.  Mrs. Trammell’s social and political skills were also honed during this time and was intensive.  She married a pastor (Rev. Theodore Trammell), had two daughters, three grandchildren, and two great‐grandchildren.  The Morehouse School of Medicine was served as she was Chairperson of the Prevention and Research Committee (PRC) for ten years.  She also served as the Chairperson for the South Atlanta Redevelopment Corporation.  She still faithfully serves her church (Henry M. White United Methodist Church).  She continues to work tirelessly in many capacities as her wisdom is often sought by others.